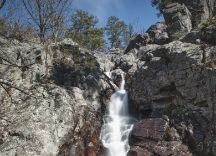 Take some time this summer to view the wonders of nature. Missouri is home to some of the most breathtaking natural rock formations, caves, and waterfalls in the lower 48 states. Outdoor activities abound, and your next vacation would be well spent viewing the best natural attractions in Missouri.

Less than an hour and a half south of St. Louis, you’ll find the Hughes Mountain area, which features a 1.5-billion-year-old Precambrian outcrop known as the Devil’s Honeycomb. You don’t need to be a nature lover to appreciate this beautiful geographic marvel, so take the 1.6-mile Devil’s Honeycomb Trail to the mountain’s highest point.

Stop at one of the eight observation areas at St. Louis’ Columbia Bottom Conservation Area to see where the mighty Mississippi and Missouri Rivers meet. Educational displays dot the areas, offering facts about the area so that visitors can learn some history on their self-guided tours.

Visit Missouri’s underworld at this state park near Columbia, which features a large cave system, sinkholes, a natural spring, and an underground stream. If it’s hot, cool off at the Devil’s Icebox, where it remains a cool 56 degrees all year long.

Fishing is the main draw at one of Missouri’s first state parks, located between Springfield and Jefferson City. Bennett Spring gushes over 100 million gallons of clear water each day for the rainbow trout that attract fly fishermen from all over the country.

Free to the public, this 540-acre sanctuary in central Missouri is actively tended by volunteers. Paint, take pictures of monarch butterflies, or hike in this little-known treasure.

Visit one of the Ozarks’ most eclectic waterfalls. Most of the time, it’s little more than a serene trickle of water, but after a heavy rain, it becomes a full-force waterfall that crashes down onto the rocks below.

The gateway to the Missouri Ozarks is open year-round and has a full range of indoor and outdoor activities. Once a summer camp for kids, the park is named for the enormous cliff that looms over Sinking Creek.

Popular with hikers and backpackers, Taum Sauk Mountain is home to the highest waterfall in Missouri, Mina Sauk Falls. The rainy season is the best time to hike the three-mile trail to the top.

The quality of the formations in Onondaga Cave is what makes this such a beautiful National Natural Landmark. Guided tours will ensure no one gets lost in the sprawling system of caves.