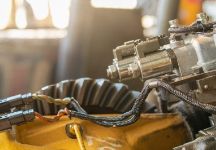 The world’s first steam engine’s invention sparked an entire revolution—the industrial revolution to get specific. Industrial work was streamlined with this marvel, and a boom of new technologies hit the marketplace as production of goods became less costly, more efficient, and distribution channels opened up. The steam engine led to more factories that could function almost anywhere, faster boats, trains, and large machinery. Steam engine technology is still used today in the nuclear power industry.

The first arc lamp was invented by Sir Humphrey Davy using a 2,000-cell battery to create a 100mm arc between two sticks of charcoal. Although this technology was ground-breaking, it was not useful at the time. It did, however, eventually lead to the development of electrical generators in the 1870s. Arc lamps are still viable today, and you’ll see them used in items such as searchlights, projectors, and floodlamps.

1844: The invention of vulcanized rubber

Vulcanized rubber is a rubber strengthened through a curing process. Charles Goodyear patented the process, and a year later, a man named Robert William Thomson invented the first vulcanized rubber pneumatic tire (inflatable tire). While his design isn’t the one currently used on cars and other vehicles, it paved the way to perfect the original. This invention allowed cars and trucks to function properly.

The first ever hydraulic motor was invented in 1876, and it’s still running today. Hydraulic motors, while not the most glamorous of inventions, paved the way for the development of most heavy equipment our construction industry depends on. Things such as skid steers, large snow plows, forklifts, and more can all function the way they do today because of the hydraulic motor’s invention.