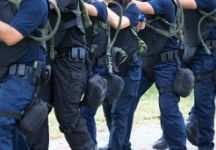 There are several items every police academy student should have with them when they start their training. We introduce a brief guide to the equipment needed for the police academy that will help you prepare for your career as an officer.

There’s a lot of gear that police officers accumulate over their years of service, but they all start with the essentials. A few essentials include a flashlight, baton, handcuffs, a taser, a multi-function tool, a wristwatch, and of course a bag to carry everything—that is until you’re in uniform. From here you’ll be able to add more to your bag or get backups if you need it.

Most academies will require you to purchase the apparel through their vendor, so double check with them before ordering anything. But the items you’ll need are tactical boots, tactical grade pants (typically khaki), a couple of polo shirts, and workout shirts. Additionally, you’re going to need a tactical belt, also known as a duty belt, along with the belt that has the appropriate attachments to hold all your gear. Some of these attachments would be holster for your sidearm, handcuffs, flashlight, taser, baton, and so on.

Being a police officer can be a dangerous career, so of course, they’re going to try to simulate reality during training. With that said, there are some items you’re going to need to keep yourself safe during training. One of these items is hearing protection, as many cadets carry earplugs because they’re affordable; however, they typically get ear muffs before training is over. In addition, you’re going to experience hand-to-hand combat, so it’d be wise to get a mouthguard to protect those pearly whites.

To reiterate, there are several pieces of equipment needed for the police academy. There’s a handful of tactical gear that’s necessary, such as handcuffs, a baton, flashlight, and more. In addition, you should be in tactical uniform every day that you’re in the academy. This commonly includes khaki tactical pants, boots, polos, and of course your duty belt. Lastly, the academy develops officers, which means they’re going to try to break you down at times. So, you should have hearing protection and a mouthguard.