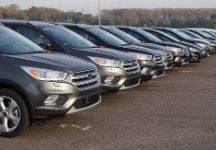 The Ford Motor Company has been around for a long time. Since 1903, they produced hundreds of millions of vehicles; some became legacy models, and some remain in the concept stage. Nevertheless, Ford briefly launched a series of high-performance vehicles that deserve recognition: their Special Vehicle Team (SVT). The history of Ford’s SVT line is full of great ideas, never-before-seen vehicles, and some short-lived market failures. Any Ford fan, or anyone interested in the Ford Motor Company, will want to read this.

Ford launched its SVT line in 1991 with the SVT Cobra, SVT Cobra R, and SVT Lightning. The SVT Cobra and Cobra R were muscle cars designed as a high-performance version of the Ford Mustang. It was considered top-of-the line above the Mustang GT and Mach-1 models. It made its first appearance at the 1992 Chicago Auto Show and featured a 4.9L V8 engine producing 235bhp at 4,600 rpm and 280-lb of torque. Ultimately, this meant the Cobra could go from 0 to 60 miles per hour in 5.9 seconds. The Cobra R was the race-ready version of the vehicle. Another first during this time was the SVT Lightning. Introduced as a high-performance version of the F-150, Ford created it to compete against the Chevrolet 454SS. The front and rear suspension and frame were modified to improve its handling. The lightning featured a 5.8L V8 engine, 4-speed transmission, and the same towing and payload capability as the F-150. By the end of this period, Ford also launched the Ford GT90, a high-performance concept car with a V12 engine that never took hold.

From 1997 to 2004, Ford launched new vehicles and revamped older ones. The Cobra and Lightning both received upgraded paint, trim, parts, and designs. During this time, the Lightning gained some of its most popular parts, such as its supercharger pulley, wheels, suspension, and cooling mods. The Cobra underwent additional changes, including a convertible top, to improve aesthetics and performance. Not to mention, during this time Ford launched its signature Ford Focus as the Ford Mercury.

The mid-2000s saw the decline of the SVT product line. Many previous models were removed from assembly lines, and the ones still in production were improved upon less. Some considerable changes during this time include the end of the Ford Lightning and Cobra and the addition of the short-lived Ford GT. Launched as a mid-engine two-seat supercar, the GT launched as a concept car to revive the classic car names, like the Mustang. The original designer of the Shelby GT500 designed it. The car could go from 0 miles per hour to 60 miles per hour in less than 3.8 seconds. After being discontinued, the second generation of GT’s launched in 2017.

From 2010 to 2014, Ford ultimately ended the SVT line. While they never officially ended it, Ford dropped the SVT name from new and older vehicles. 2010 introduced the Ford Raptor, a heavy-duty pickup truck designed for off-road performance. Originally created for the Baja 1000 race, it soon launched as the SVT Raptor, but as of 2017, it is only known as the Ford Raptor. 2007 to 2014 also introduced the new Shelby GT500. Both vehicles are still in production and are sought after on markets, but they no longer have an affiliation with the SVT name.