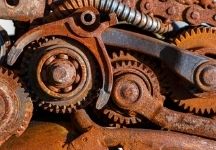 Watching a factory in motion is an exciting experience. Seeing every machine, vat, crane, and forklift working together is almost like looking at a diagram of the human body where every individual bone, organ, and muscle plays a role in sustaining life. But when rust develops on even one machine in a factory, it becomes like a disease attaching itself to one part of the body. Every other part of the body is affected. The following explores some of the dangers of rust on industrial equipment.

Rust is not the same as dust or grime, which sits on the outside of a surface. It is the physical sign of corrosion, or when metal breaks down. If left unchecked, rust can cause serious damage to iron, galvanized metal, and steel. Rusted machine parts are weaker, are more likely to stick together, are more likely to break off, and are likely to have faulty wiring. The lifespan of these machines will also be greatly reduced.

Rust affects not only the metal it is attached to but also the material around it. Any liquid or other material that is housed in or runs through rusted metal machinery runs the risk of contamination as flakes of metal enter the liquid. Although environmentally harmless, this could have serious implications for the material itself, especially if it was meant to be consumed.

As mentioned earlier, rust impacts the structural integrity of the metal that it is attached to. This is serious enough when one considers the body of the machines, but even more serious when one considers the interior of the machines. For instance, when rust corrodes containers for fuel sources such as propane tanks, it can lead to gas leaks that can cause lung damage for people working nearby and explosions if coupled with sparks caused by rusty wiring.

How to Respond to Rust

Fortunately, rust is a relatively simple hazard to avoid. There are many methods for cleaning rust, even off industrial machines. Rust can be chipped off with tools and cleaned off with chemical compounds. It can also be effectively removed using a process called shot-blasting that can be used on large-scale industrial machinery. With time and regular machine maintenance, the dangers of rust on industrial equipment can be avoided completely.