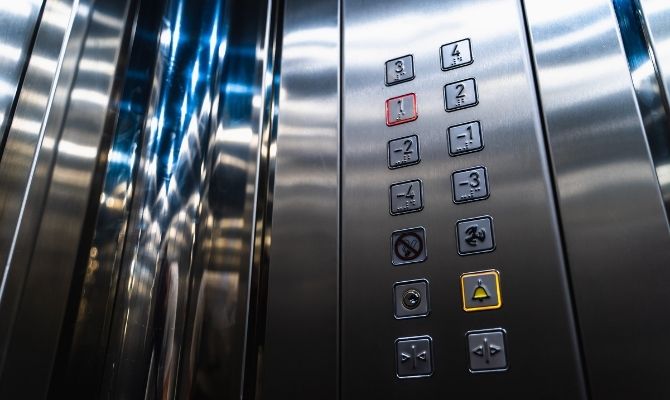 In many ways, elevators are marvels of modern science. With the push of a button, you can move a hundred feet in the air in less than a minute. But elevators have a way of playing with our insecurities, such as our fear of enclosed spaces or not having control over our circumstances. Because of this, myths and facts about elevators begin to blur until it’s hard to tell fact from fiction. Here are some “facts” you shouldn’t believe about elevators.

Many of us have been on an elevator with a mischievous child looking to frighten everyone by jumping up and down. Maybe you were that child. But you can rest easy the next time a kid wants to let off some steam on the lift. Every individual cable on an elevator can hold the weight of a car, and it comes equipped with three separate brakes. A child or even an adult’s weight is far from enough to break the elevator.

The image of the elevator dropping inspires many people to take the stairs. However, free-falling elevators aren’t just uncommon—they’re nearly unheard of. The last reported elevator free fall occurred in 1945 when a small aircraft crashed into the Empire State Building, severing all the cables. Given all the safety precautions we’ve just named, it would be difficult for an elevator to fall.

Consequently, it’s unlikely that your elevator will fall. But what about getting stuck with you inside it? Although more common, elevator breakdowns only occur about once every 100,000 rides. They can occur because of something as simple as a routine maintenance issue, but they may also occur because of a serious hydraulic leak in the elevator’s final drive motor. Still, elevator-related injuries generally don’t happen because of a breakdown.

If an Elevator Falls, Jumping at the Right Time Can Save Your Life

Even though free falls are incredibly unlikely, the idea of them has sparked plenty of theories about how to save your life if one does fall. One of the most common myths about elevators in free fall is that jumping in the air just before the elevator hits the ground will save you from injury.

Although easy to visualize, the popular television show MythBusters disproved this theory. On the show, they created a crash test dummy designed to jump at the right moment. Even jumping three feet in the air, the dummy still hit the ground at 50 mph, which is fatal. A safer option would likely be to lie flat on the elevator floor so that the force of the impact distributes evenly across your body.