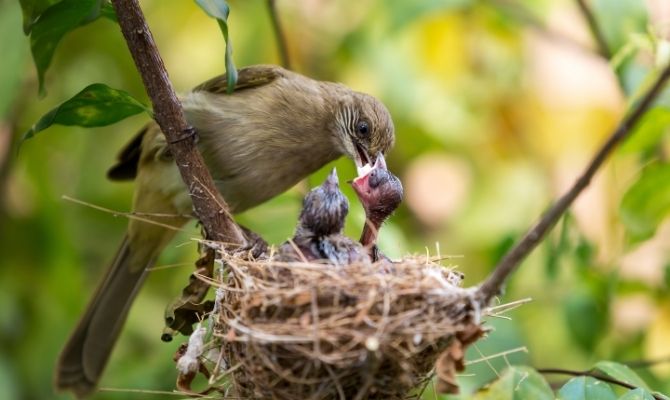 It can be hard to wrap our minds around the differences between certain species—starting with how we enter the world. The truth is that there are two types of species: altricial and precocial. Understanding the difference between precocial and altricial animals will help you better categorize them and understand their capabilities.

Precocial species’ young are born “mature.” Animals who are mobile from almost moments after being born would fall under this category. For example, some birds are precocial and will hatch with downy features and their eyes open, ready to leave the nest shortly after. Whereas other birds are less self-sufficient right off the bat.

Let’s take a look at dinosaurs. Similar to birds and reptiles, they hatched from eggs. More often, paleontologists deem carnivorous dinosaurs and reptiles to be more precocial, as studies reveal that their diets changed as they aged due to what prey they could catch. Though all reptiles are precocial, they still need brief parental care and guidance. Other species of fish, amphibians, insects, and invertebrates undergo a larval stage (eusocial) to finalize development.

Some mammals are considered precocial as well—though they stay with their mothers after birth, they are mobile. This includes most ungulates, hares, guinea pigs, horses, deer, and other similar creatures. In thinking about it, you may be able to pinpoint a few that you know of.

The species that are extremely precocial are called “superprecocial.” This, again, includes some birds and dinosaurs that were capable of venturing out on their own shortly after birth. Additionally, the blue wildebeest can stand within ten minutes of being born and walk within thirty.

Altricial species are those who have young that are immobile, lack adult hair, feathers, and certain capabilities such as obtaining food, opening their eyes, and keeping themselves alive. This developmental strategy is where young are helpless such as humans and some birds (herons, hawks, cuckoos, owls). Cats and dogs also give birth to altricial young, as their babies cannot fend for themselves or even see for a few days after they’re born.

For dinosaurs, this was seen more in herbivorous species, as these dinosaurs raised their young to move in herds and learned to graze and find food. The teaching of survival was much more present in those groups of prehistoric creatures. However, some carnivorous dinosaurs acted similarly to crocodiles and tended to feed their young for a brief time.

The difference between precocial and altricial animals is not only dependent on species of animal but other factors as well. Some creatures prolong the gestation period and give birth later to allow for their young to grow stronger within the womb or egg. On the other hand, other creatures tend to their young and teach them how to survive for varying lengths of time after birth.