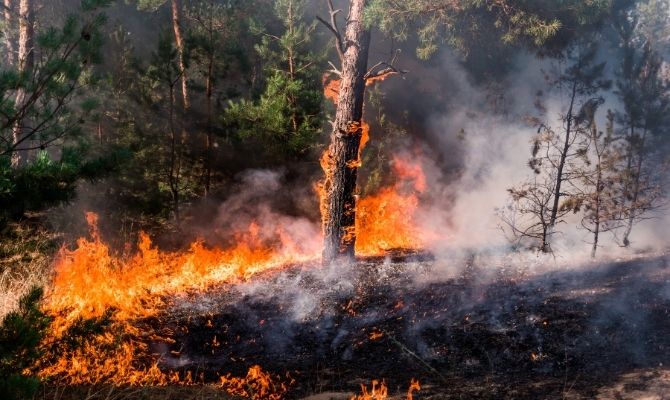 Suppressing a fire starts with removing one of the three main components it needs to continue burning—heat, oxygen, or fuel. While removing oxygen is difficult in a wildland area, heat is removed with water, and fuel is removed by digging away vegetation or burning the fuel before the existing fire can get to it. There are multiple different strategies used for fighting wildland fires; explore the best of these tactics so your team can better fight fires.

While everyone has a different role to play in wildland fire fighting, the team, in general, uses a series of different tactics to keep the fire at bay and to help minimize destruction. Control lines are natural or manmade boundaries that help control the direction in which the fire burns. A ridge of rocks or a river serves as great natural control lines, but firefighters might create their own by clearing out vegetation and brush that has the potential to be engulfed in the fire in the future.

If your team can arrive at the situation before the fire increases in intensity, you may choose to flank the fire and use direct attacks to lessen the blaze. Typically, you begin at an area that has already burned to spray down any remaining hot embers or coals. The fire is minimized more when the workers close their flank around the fire’s perimeter; however, a fire that is 100 percent contained still has the possibility of jumping your barriers and control lines, so you should always be on guard.

When a fire is obscenely large, hot spots can occur where the fire grows too hot, active, and large. These areas of the blaze need to be diminished immediately to avoid more threats to the wild animals and surrounding land. To stop hot spots, firefighters apply water, dirt, and retardant to the fire.

After the wildland fire is contained, a threat can still occur because of the burning embers and coals the fire leaves behind. Firefighters will walk through the disaster to ensure the fuel keeping the fire alive is no longer a factor. They will also remove additional smoldering material and clear areas from rotten logs, stumps, branches, and other combustible materials.

There are other strategies for fighting wildland fires such as backburn, cold trailing, and ariel attacks. There is no single best strategy; instead, a slew of techniques is used to stop the blaze. Always continue to use critical thinking while fighting wildland fires and be on your guard because of the unpredictable nature of these natural disasters.