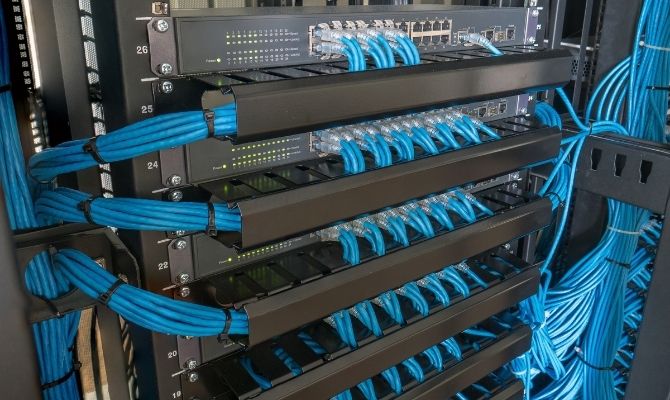 Creating a well-designed IT infrastructure is essential to the success of most modern businesses. Failing to do so will likely result in a decline in productivity, potential security issues, and reduced product quality. In order to create a quality IT infrastructure for your business, you will need to incorporate a variety of critical devices into the IT structure’s design. After all, IT services are impossible without the presence of hardware. Below, we have listed some of the main devices that make up an IT infrastructure.

Packet switching allows the networking switch to receive and forward data to its intended destination at the data link layer of the OSI model. As a result, two devices in a network can communicate with one another without the need to forward their traffic to all other devices in the network.

Another important device that makes up an IT infrastructure is a router. A router is used to forward or route authorized data packets from one network to another network connection. In doing so, routers allow devices that are separated on different local area networks (LANs) to communicate with one another. The majority of routers will also log and store files regarding the local network activity that they interact with.

Network servers also play an important role in creating a quality IT infrastructure. A network server is essentially a computer that is used as the central receptacle for data and programs in the network. This repository is utilized by numerous users in the network who can gain access and share its resources. Servers can come in a variety of different forms, such as file servers, web servers, database servers, directory servers, and application servers, just to name a few.

In order to properly protect a network from outside attacks, firewalls are frequently implemented. A firewall is a network security device that is used to monitor incoming and outgoing traffic in a network. Based on the set of security rules that are programmed into the firewall, it can either permit or block data packets from entering or exiting the network.